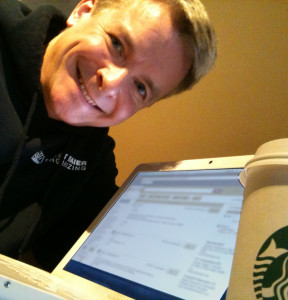 A while back I wrote a guest post on my friend, Brian Bish’s blog about organizing social media. Most of what I addressed was how Brian got my social media more organized through Hootsuite. This was great for establishing a manageable, weekly foundation, but I discovered I wasn’t good at the next and most important step: social interaction.

Again, I needed a simple, manageable plan, so I had Brian return this morning to help me with one. What struck me is how much his advice for effective social media is the same as the advice I give for staying organized. Here are some examples.

We found that I had several streams in Hootsuite, I didn’t really use. There was no point in having them for the sake of having them. We made sure we salvaged the most valuable follows, then we tossed the excess streams. Each time we did, I breathed a huge sigh of relief. Good riddance. My Hootsuite is now so manageable!

I’m always telling my clients, who are wondering where to put something, to ask why they are keeping it. The answer reveals the right location and sometimes the right location is in the trashcan. Similarly, Brian wanted me to get clear on why I was keeping people in my streams. Was it more for conversation or content? These two reasons became two new streams, that are much easier to use than all the old ones, that we tossed.

I always say getting organized is, ultimately not about sorting out you’re your stuff, but sorting out your priorities. Within the streams I was keeping, Brian had me look at some of the people I was following, more critically. If there was someone in my “conversation folder” that didn’t have a history of conversations, out they went. By keeping less quantity, I have more quality. Keeping less stuff ensures more action.

Brian made sure the Twitter app and Hootsuite app on my iPhone were up to date, so I could use them quickly and easily when I’m waiting in line. I may not always have the time for Social Media in my office, but when I’m killing time in line, I’m LOOKING for things to do. Perfect!

I had been planning on 10-15 minutes a day to interact with people on Twitter and most days I didn’t keep up with that non-ambitious plan.  Brian said the problem was, that it was too much time. Five minutes would better and if nothing inspires me to converse, skip it! OK, that’s so manageable that I believe even I can do it.

There’s such a thing as over-organizing

I’m always telling my clients, that it is often counter-productive to stuff everything into labeled boxes. Brian kind of told me the same thing when I asked him if there was something we could do about all the clutter that was left in my Home Feed. The immediacy of the Home Feed is the most vital part of Twitter. It’s kind of the whole point. In other words, I shouldn’t try to bottle up these conversations, I should answer some of them!

So these are some ways I have learned to organize more action into my social media conversation plan.  It’s what to do, but if you want advice on the ins-and-outs of how to do it, I definitely recommend giving Brian a call at  203.434.3474. Or at least follow him on Twitter @BrianBishCT

What strategies do YOU have for putting the ACTION in your interactions, in social media?